How do you judge the finalists and winners of an international embroidery competition? It’s no easy task, first you need to find specialists with embroidery and design expertise, a discerning eye and a passion for emerging design. These individuals must become intimately familiar with the specially written brief and consider each entrant’s embroidery based on their interpretation of the brief and their creative and technical talents.

Our 2022 judging panel is comprised of educators, practitioners and specialists from every sphere of the embroidery universe. They consider the work in progress at the first stage to determine our finalists, and again at the live prize-giving where they judge the completed embroideries. At the live final our judges also have the opportunity to review supporting research materials to form a comprehensive understanding.

Judges might also talk to finalists about their submissions to interrogate techniques, influences and gain a clear understanding of how they arrived at their exhibited work.

Exquisite handcrafted sculptural masterpieces showcase the fantastical imagination of this quietly spoken Irishman who, for over 30 years has created couture hats that draw admiration and surprise in equal measure and transforms the ordinary into the extraordinary. Treacy, has worked with the greatest designers of our age, in 2007, he was awarded with an honorary OBE granted by His Royal Highness the Prince of Wales, for his service to the British fashion industry and he has won the British Fashion Awards title of British Accessory Designer of the Year, five times.

Using fashion catwalk as his platform around the world to inspire and to challenge people’s perception of the hat. Philip Treacy has worked with many icons such as the Duchess of Cornwall, the Duchess of Cambridge, Lady Gaga, Grace Jones, Madonna, and Kate Moss.

Cornelia Parker OBE is one of Britain’s best loved and most acclaimed contemporary artists. Always driven by curiosity, she reconfigures domestic objects to question our relationship with the world. Using transformation, playfulness and storytelling, she engages with important issues of our time, be it violence, ecology or human rights.

A major retrospective of her work opens at Tate Britain in May 2022.

Esme Young is an English fashion designer and television presenter. She has made costumes for many films including The Beach, Bridget Jones’ Diary, and Trainspotting. She had also worked for different editorial adverts. Some of the high profile campaigns she has worked for include: Tia Maria (with Iman), Levi’s, Boots No 7, Marlborough, De Beers, Pretty Polly tights, Max Factor, Yardley and Rimmel. She has also been a part of an individual commission for Phil Collins, Dame Kiri Te Kanawa, Cher and Jane Asher. Since 2016, Young has been a judge on The Great British Sewing Bee.

Anthea Godfrey is the current Artistic Director of the Embroiderer’s Guild and a highly experienced embroiderer and educator. Previous positions have included Principal Lecturer at the London College of Fashion, and Principal of The International School of Creative Arts, London. As a lecturer, she has been invited to speak in France, Germany, Denmark, Australia, Finland, New Zealand, Japan and Kenya. She also has been an examiner for ‘O’ and ‘A’ level, City and Guilds Creative Studies, Diploma in Foundation studies and B.A. Hons Embroidery. 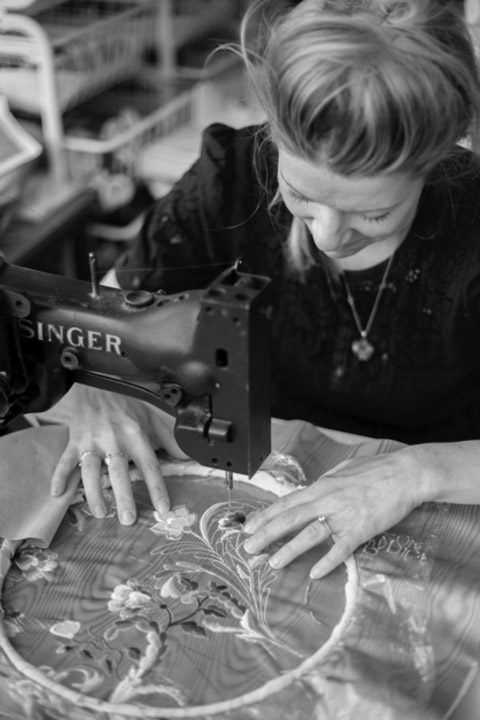 Born and raised in Sussex and now living in Brighton, Jenny King is one of the most experienced and exciting embroidery and mixed-media textile designers working in the UK fashion industry today.

After graduating from the Royal College of Art in 2002 Jenny worked  freelance for designer and artist Karen Nicol. It was here that Jenny perfected her skills using the Irish machine before starting her own business.

The studio quickly established itself around her as demand for her work grew and Jenny King Embroidery now counts amongst its clients an ever-growing list of high profile designers including Erdem, Mary Katrantzou, Vivienne Westwood, Tom Ford, Roksanda, J W Anderson and Olivia Von Halle. As well as developing embroidery with clients in the fashion industry the studio also works with a number of Theatre, film and costume designers  including  Royal Opera House,  Shakespears Globe, Royal Shakespear Company and Glyndebourne Opera House .

As her reputation has grown, so has Jenny King Embroidery and Jenny now employs and manages a growing team of embroiderers. She prides herself on the high standard of work that she and her team regularly deliver and is committed to working with both established and emerging talent.

Anna Murphy joined The Times as Fashion Director in 2015, having been the launch editor of Stella at The Sunday Telegraph. She has interviewed the industry’s biggest names and done everything from wearing a frock made of bin bags to attempting the Angelina leg pop. Her book How Not To Wear Black is a guide to finding your personal style and creating your forever wardrobe.

Her latest book is called ‘How Not To Wear Black’