Heralds and Coats of Arms

Recently we posted some pictures of the British Coat of Arms and received requests to write an article explaining more about this unique artistic and symbolic expression. Read on to learn a few basic principles of traditional heraldry and the design conventions of a typical Coat of Arms.

Heraldry, is defined as the systematic hereditary use of an arrangement of charges or devices on a shield. Heraldic crests, the centre-most element of a Coat of Arms, derive from the helmet decorations of medieval knights. The decorations helped to identify the knights in tournaments and battles. Crests were used separately from the coat of arms to express ownership by or loyalty to a family.

By the 16th century family networks helped maintain and develop social position, people were fascinated by heraldry and armorial symbols.

It was important that a gentleman understood coats of arms. Although coats of arms take a form that suggests military power. They did not originate in warfare, despite popular belief. Heraldry was developed in order to indicate ownership or loyalty and it was especially on seals to confirm the owner’s agreement to a legal document.

What is a Coat of Arms?

Distinct from Heraldry, a Coat of Arms is the broader design around the shield. Special terminology describes the various areas of a Coat of Arms. It helps to imagine that the whole Coat of Arms as a theatre stage and the different components are all actors looking out onto an audience the ‘Dexter’ refers to the actors’ ‘stage right’ or what an audience would perceive on the left, conversely ‘Sinister’ refers to the actors’ ‘stage left’ or what an audience would perceive to be the right.

The ‘Sinister Supporter’ would be whatever animal or object is situated on the ‘stage left’ or the viewers right. ‘Mantaling’ is a decorative device that is situated above a central shield but below the decorative elements at the top, these in turn are called the ‘Torse’, ‘Coronet’, ‘Helm’ and ‘Crest’. At the base of most Coats of Arms is a ‘Mound’’. All these different elements exist in most Coats of Arms but look vastly different depending on what is relevant to that particular family or person.

Many crests take on animals, mythical or real, whose physical and imagined traits evoked the family history. For instance a Coat of arms featuring a pair of Heron’s both ‘Dexter’ and ‘Sinister’ may there to present traits of the family, such as being very tall. Others made a pun on the family name. Some may have inanimate objects to convey livelihood such as saddles for a saddle maker, a sickle for a farming family and so on. These important characteristics were also there to show the social standing of individuals and families. 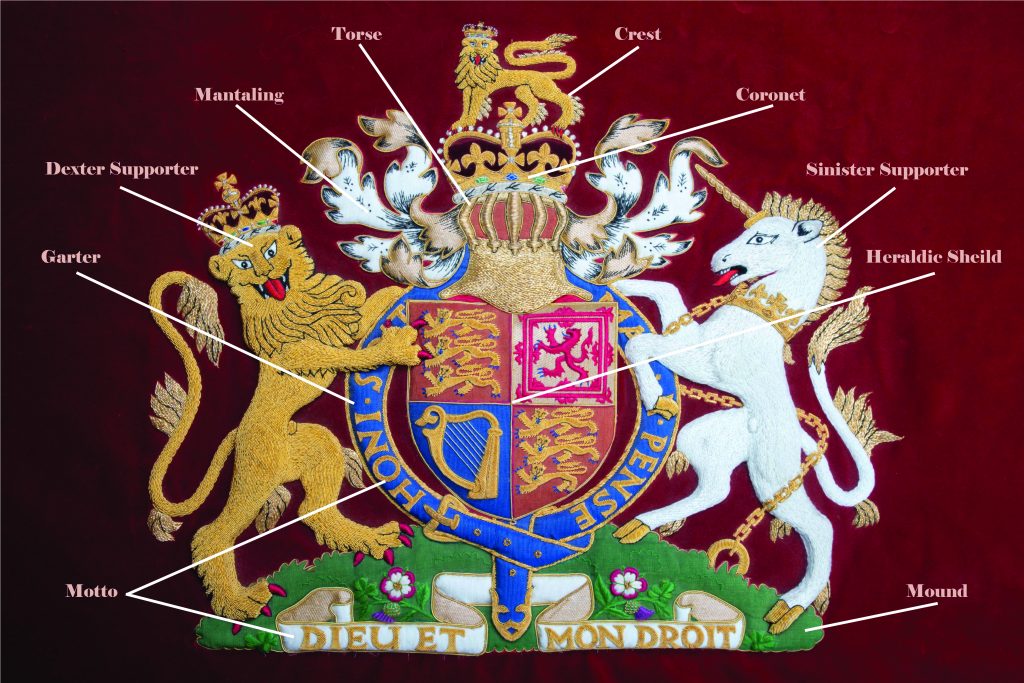 They would be clearly displayed in portraits or incorporated into their houses in the form of stained glass windows.

Colour is also very important in heraldry, with each having its own special name derived from Latin; ‘azure’ for blue, ‘gules’ for red, ‘sable’ for black, ‘vert’ for green, ‘purpure’ for purple, ‘tenne’ for orange, ‘sanguine’ for blood red, ‘or’ for gold and ‘argent’ for silver. All of these colours are referred to collectively as tinctures and must be included in the annotations for the heraldic designs.

The British Coat of Arms

Possibly the most recognisable Herald is the Coat of Arms associated with the British Royal family. This Coat of Arms also represents the United Kingdom; we see lions, a unicorn, crowns, helmet and other significant objects all with specific individual meanings. Typically a lion will represent courage, nobility, royalty, strength and valour whilst a unicorn can be a symbol of purity. These both also represent England and Scotland showing that objects or animals can have multiple, multiple-layered meanings.

The shield in the centre is quartered, depicting in the first and fourth quarters the three lions of England; in the second, the rampant lion and double tressure flory-counterflory of Scotland; and in the third, a harp for Ireland, also known as the ‘Maid of Ern’.

This Coat features both the motto of English monarchs, ‘Dieu et mon droit’ (God and my right) in a scroll in the Mount, and the motto of the Order of the Garter, ‘Honi soit qui mal y pense’ (shame upon him who thinks evil of it) on a Garter belt surrounding the shield.

In an article of this length we can only scratch the surface of heraldic symbolism and the intricate details contained in a typical coat of arms. The breadth of symbolism, design and significance has led to innumerable variations.

The College of Arms, a royal corporation with jurisdiction over England, Scotland, Northern Ireland and the Commonwealth, offers services including recording, granting and regulation of heraldry, coats of arms and pedigrees. Dating from 1484 this organisation is the authority on the subject.

For more information about heralds or coats of arms visit college-of-arms.